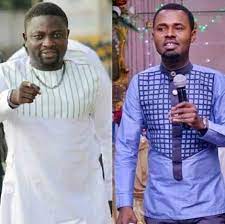 The dispute between Brother Sammy and Ernest Opoku Jnr began when Ernest claimed that he (Brother Sammy) had kidnapped his manager, according to Brother Sammy.

Ernest Opoku‘s manager, according to Brother Sammy, went to a music recording studio to hear his song and became interested in him, so they began working together.

On UTV’s Showbiz, he stated Ernest Opoku was his son and that he used to mentor him in his music career, and that he even began to sing like him.